I just saw these alleged photos of the boxing champion Oscar De La Joya in pink panties, fishnets, and heels! A macho drag queen, indeed! However, De La Joya's camp denied that the guy in the picture was him as well as the allegations of an affair with an exotic dancer who allegedly took the pictures...

Anyways, De La Joya or not, these photos are really hot! hehehe 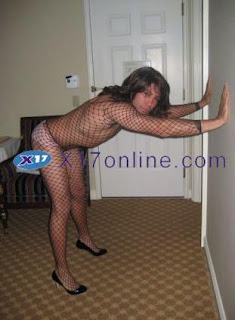 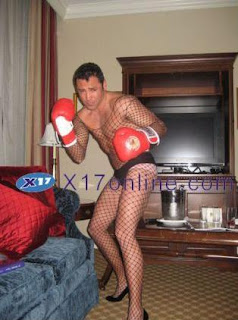 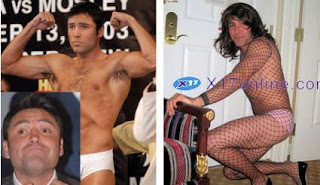 I never heard about Alicia Silverstone for quite sometime now. Well, thanks to Britney, Paris, Lindsay, and the gang...

Just today, I've seen Alicia's latest ad sponsored by People for the Ethical Treatment of Animals or (PETA). Alicia posed nude in a 30-second commercial to promote vegetarianism. This pro-vegetarian commercial was first launched in Houston which was ranked as the sixth fattest city in the US.

Posted by SuperNemiXX at Friday, September 21, 2007 No comments:


I wasn't in a good mood last Sunday. I thought I'll be sleeping the whole day. It would really be nice coz the weather is very suitable for a good sleep. However, I end up trying o figure out how will I kill my time while on the bus on my way to Barotac Viejo. It was soooo boring not to mention the fact that I can't sleep even though how hard I really tried. The boredom keeps building up the moment we arrive there.

And speaking of cousins, let me introduce to you Bigboy. It's his nickname. Bigboy, as I have known is just one of those not-so many cousins of mine who were able to have a degree. Bigboy is a BS Education graduate but I don't really like him. I thought there's something in his face that tells me he shouldn't be trusted. Besides he doesn't act as a professional and I consider him a arse. You might say I'm being judgmental because of what I'm writing now. Well, probably I am. I must admit I don't really get to spend quality time with my cousins (on my father's side) especially with him. Hmmm.. and honestly, I don't have plans to do so- not in he near future. I don't really trust him. Perhaps because of what had happened before that up until now, I'm very hesitant to give him my trust. By the way, to get things straight, It's isn't only I who doesn't trust him. There are lots of us- his wife's mom, most of his aunts and uncles (including my mom and dad), and his previous employers (probably all of his previous employers).

And last Sunday, I can't help myself smirking when I saw him at the church. The mass for our the death of our cousin has already started when he came. Well, being late was acceptable for me. What's worse is that I saw him sleeping after awhile! Jeez, how impertinent could this man get? It was later when I my brother told me he's drunk. Look at how he looks like: 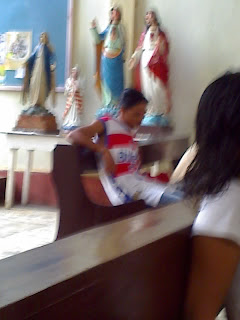 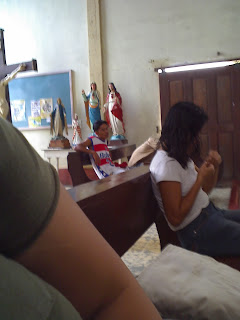 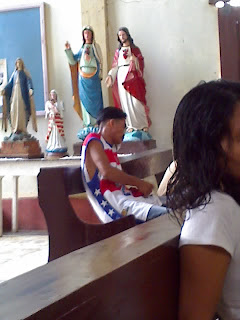 Whew... I just hate the fact that he still have time to get drunk but doesn't have time to work for his kid and his family... I just wish he could be more responsible. Well, if not, he could at least try.

Posted by SuperNemiXX at Wednesday, September 19, 2007 No comments:

So, I'll be posting something about Bamboo today. It has been quite awhile since I haven't written anything about them except the time whe I got to meet them. I've heard last Sunday that as Pepsi endorsers, they'll be having a new promo video for the company's new contest called PepSikat Challenge. And the prize? Ten winners of this contest will get to watch Black Eyed Peas concert live in Bangkok!

I'm not really interested of joining, but I end up watching the promo video over and over again! Well, how can I not? Nathan, Vic, and Ira wee really cool in the commercial not to mention that it's interesting to see Bamboo being censored at the last part! I wonder what was the word he said there!ahahaha... Just kidding, I think I already know. Mmmm.. curious about what I mean? Here, watch this!

Posted by SuperNemiXX at Tuesday, September 18, 2007 No comments:

It has been almost seven days now since my last blog entry. Actually, I never really intend to write something here but I end up doing so! 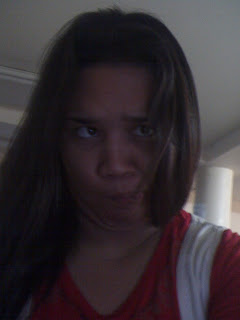 BAKA!. I first encountered this word from an Anime called Gakuen Alice. Then, I got interested on the meaning of the word since it being used most of time in the series. According to freedict.com, the word BAKA in english means fool (an,id), foolish, idiot, trivial matter. However, the english translation in the anime sometimes uses the word stupid for BAKA. So, whatdoes the sord stupid means in Japanese? From the same website, stupid means bakabakashii, noroi, honoka, futsutsuka, oroka.

I, somehow feel like one tonight. I feel quite stupid but not idiotic. Mmmm... Does it make sense? lol. But seriously, I really do. I end up not being able to stand up with the words I have said before. And its really stupid! BAKA! definitely! I feel a bit disappointed with myself right now and I just hope I can stand up for what I have just decided... And I wish those people involved won't be too disappointed! I know they will be but hopefully not that much!

BAKA!
Posted by SuperNemiXX at Friday, September 14, 2007 No comments:

For the first time in days I finally have something to write about. It's not about Chiz Escudero's newly-born twins, Cecilia and Joaquin. This is something more interesting (well, for me it is!) and funny as well. It happened yesterday morning when I went home straight from the office. My lola and our neighbors were sitting beside the road together with Nang Meding (the main character in my story)...

Nang Meding as far as I know, is the mother of the wife of my paternal step-uncle. I don't really know her age but I know she's old. When I arrive home yesterday, I went straight towards those people sitting beside the road which, I usually do 'coz I would tease and play with my baby cousin first before entering the house.

So, there she is- Nang Meding with her red fluffy eyes which, I then realized that she cried. While playing with my cousin, I decided to listen to there conversation... Nang Meding was really into telling everyone about what happened between her and her son's wife named Boots. She said that Boots got mad 'coz she thought that Nang Meding has her own favorite grandchildren and that perhaps Boots' kids were one of them.

As she was telling her side of the story, I was quite amazed of the way she talks. So, I decided to record part of her monologue (secretly, of course!). Man, how I wish I have larger memory so I could record it a little longer! She looks quite funny to me and when she talks, its really entertaining. But, don't get me wrong I definitely got the substance of her monologue. I know where she's coming from... The fact that she was mistreated by Boots was a no-no. How could someone mistreat older people especially your husband's mother and yell at them, "Guwa ka di bala kay madumugay ta!" or "Daw gaga ka nga mal-am ka!", and the list goes on... Tsk. Tsk. Tsk. Bad Boots (who looks like a cheetah!)! Just kidding! hihihi... (Actually, so-on ko si Boots and her husband)

Here's a part of the monologue Nang Meding had yesterday. I know its a bit short but still I can't stop smiling every time I watch it!

Posted by SuperNemiXX at Saturday, September 08, 2007 No comments: 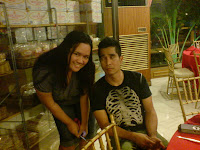 This is my second blog entry about my amazing experience last Saturday!Last Saturday was Bamboo's gig in Iloilo. Exactly a year after their gig at Pier 16, Bamboo entertained every Ilonggo with one heck of a rock concert. And just the same, the excitement was overpowering that we couldn't get enough sleep in the morning. What happened last Saturday was extraordinary... After the long wait, we had the chance to have our picture taken with the band and all it takes was a little 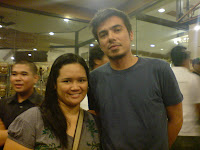 bit of guts! Pakapal ba! And it's all worth it!

It's been days and the concert was over but I still in cloud nine! Can't get over the chance I got. I can't even forget what I said to Bamboo when he's about to leave, "Bambz, isa na lang..."! (Feeling close? Sorry, nag-stammer lang...) I can still hear Ira's voice when he said, "Nasaan yong camera mo?". 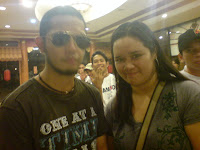 I know this is a bit corny and others might think this is quite shallow. Actually, my mother thought so too but not anymore. She's been used to it! I even le her see my photo with Ira and she was able to identify who he was! It was really surprising! She didn't even said no when I told her that I'll buy a camera phone 'coz Bamboo's coming...

I'm pretty sure Edward will tease me with the "kurimaw" thing because of the photos. So what? At least I'm not into Cueshe ( 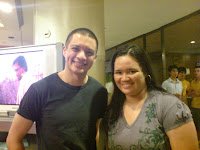 I know Edward has nothing against Bamboo. But if he does... So, Peace out! 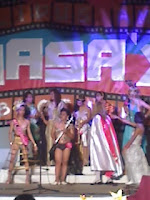 After strolling at SM City, Beth and I finally decided to watch the HASA XXV at the UPV Auditorium. We know were so late, but who cares? The contest was just secondary to the main reason why I'll go and watch HASA (and endure the hot environment inside the audi) - it's something else...

I beleieve it has something to do in the past knowing that I really enjoy my last year in the university because of the sportsfest plus the HASA! 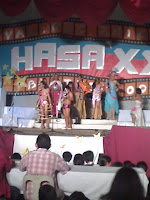 It's good to see the same good looking and gorgeous faces for a little more than an hour as well as just being in that situation- watching every contestants trying their best to get the right punchlines for the audience to laugh!

Man, I can't even stop my self from cheering just like before. The only difference now is that I don't get to cheer for Magnates alone but for every contestant who really made me laugh!

Here's the 2007 HASA Winner from the Skimmers in her interview: 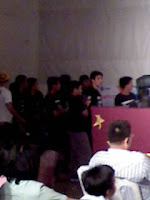 P.S. I really enjoyed watching the Skimmer's representative... The guy was really funny! By the way, I discovered a new motto after watching HASA XXV last night.

Two years ago, there was an expression made famous by the representative of SoTech during HASA: Some might remember the famous STD which simply means "steady" (e.g.: STD lang, STD lang = steady lang, steady lang), gets?

This year, I love the new "greeting" (which I think from the Clovers), "Hi, to all tipsy subscribers!"